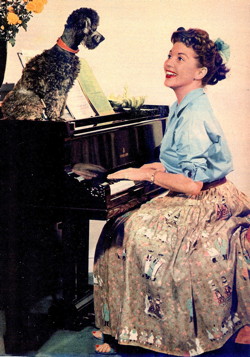 Dorothy Janette Marguerite Davis was born November 2, 1916, in Memphis, TN, the eldest of 8 children, but grew up in Pine Bluff, Arkansas. As a child she studied piano, playing and singing while in public schools. At 14, she entered and won an amateur contest and was awarded a radio contract at a Memphis radio station, driving a 200-mile trip for each program. She had her own program, singing & playing piano.

Though Janette had been mainly concerned with her piano studies, she now had switched to singing as her main interest. So she moved to Quincy, IL, when she got an offer to sing on her own show at a local radio station. That was followed by a stint at a Shreveport, LA radio station and she began to receive offers from other stations. After getting an offer from a Cincinnati station she again relocated, appearing there on something called Uncle Walter's Dog House.

In 1939 she won a spot as the weekly "girl singer" (sorry folks, that's what they were called) on NBC’s Red Skelton Avalon Time, sponsored by Avalon cigarettes. Skelton was then fairly popular but his big success was right around the corner. All Janette did was sing one pretty song per program and, at age 23, her voice was at least a full octave higher than she’d sound seven years later on the Arthur Godfrey shows. She seemed to be imitating the dozens of lesser Big Band sound-alike girl singers of that era. As she matured, so did her voice and her style.

Next stop: Chicago, where she regularly sang both on NBC's Don McNeil's Breakfast Club and Garry Moore's Club Matinee. Both of these network shows also featured The Four Vagabonds, an African-American quartet similar to The Mills Brothers. It was during these shows that Janette and the Vagabonds crossed paths. At some point in 1943 she recorded at least ten Radio Transcriptions, with The Vagabonds providing the backup harmonies. They were billed simply as “The Four Vagabonds and Janette.” Such transcriptions could then be used on various musical and disc jockey radio programs without the actual singers even being there.

In January, 1944, she moved to a CBS station in Chicago, WBBM, singing on the Petrillo, Janette and MacCormack network show, as well as The King's Jesters and Janette, Serenade and Swing, Jobs for GI Joe and Victory Matinee.

Her marriage to Robert Jenson lasted from 1939 to 1945. Eight years later she told a TV Guide interviewer: "He was a nice guy but I just wasn't the wife for him. I was too strong. I was making a good living and there wasn't enough incentive for him to make an effort. He needed someone who would have to lean on him. He got a girl like that and now he's happily married and has a couple of kids."

After all this traveling she was finally able to unpack her suitcases permanently when she moved to New York as a radio staff singer on CBS. This was a life-changer. Arthur Godfrey, who'd just begun his daily network Arthur Godfrey Time morning show, was then looking for a regular female vocalist. He'd heard Janette sing, liked her voice & hired her sight unseen in April, 1946.

The Godfrey show was an unscripted, free-wheeling affair with a live audience, chatting about news of the day and whatever else crossed his mind, wisecracking with orchestra leader Archie Bleyer, announcer Tony Marvin, resident "boy singer" Marshall Young (soon replaced by Bill Lawrence), the Mariners quartet, and Janette.

The show became immensely popular and gave Janette Davis the sort of nation-wide exposure she'd never had before. She had been singing softly and sweetly for years, doing the same sort of girl-singer ballads and torch songs then popular, and her slight southern inflections caused her to be often compared to Dinah Shore. But the Godfrey shows loosened her up and she started to take on tricky rhythm arrangements, slam-bang belters and novelty numbers as well. As her musical range grew, so did her popularity. Her single of the raucous hillbilly number "I Didn't Know the Gun Was Loaded" became her biggest-selling Columbia record.

Along with the Godfrey shows, during the 1947/48 season she had her own CBS 15-minute radio program, The Janette Davis Show, on Sunday nights. Her theme song was "I'll Get By." She guest-starred on many other musical radio programs as well.

In 1949, CBS began to simulcast Arthur Godfrey Time on TV, as well as on radio. As Godfrey's popularity grew, in 1952 they also gave him a Wednesday night live variety show, Arthur Godfrey & His Friends. The cast was at first the same as on his morning radio shows, and gradually increased as he discovered new vocal talents. A few, including Janette, lasted till the end of the show in 1956, but many others - famously - didn't. Janette was the highest paid and longest lasting of Godfrey's cast of vocalists.

By then, Janette had tired of the grind and she decided to retire, but Godfrey made her an unexpected offer. His Arthur Godfrey's Talent Scouts Monday night TV show had dropped precipitously in the ratings by 1956, so he asked Janette if she'd switch gears and become that show's new executive producer. He knew that she'd always had a sharp eye for talent and she accepted the job. So successful was she that the show climbed back up to its previous top 10 spot in the ratings. But Godfrey's popularity had by now faded dramatically, and Talent Scouts was cancelled in 1958.

This time Janette retired for good. On Oct. 17, 1957, she married Frank Musiello, formerly a musician on the Godfrey shows and then Janette's associate producer on Talent Scouts. They moved to Naples, Florida and Janette never sang another note professionally.

The marriage lasted until Janette's death on April 25, 2005 at age 88. She was survived by Musiello; one daughter, Gail Dolan of Naples; two sisters, Marlene Magnan of Naples and Carol Alonge of Brooklyn, NY; and four grandchildren. She was also preceded in death by one son, Gary F. Musiello.